Eggs a la Goldenrod
Essay in "Hunger and Thirst: Food Literature," edited by Nancy Cary.
Food as memory. "Simplification and denial of food was...my mother's own version of courage... Eggs-a-la-Goldenrod were much more than a social hypocrisy. They were a refined person's article of faith that civilization was better than barbarism, that courteous discretion trumped rage."
A Song for J.R.R. Tolkien
Nine years before Tolkien's death, an 18-year-old college student writes to him and offers to sing him the poetry from his books that she has set to music. The letters he sends haunt her for the next 40 years. Published in The Antioch Review (Winter 2015), this memoir piece is a meditation on journeys and longing.
Hebridean Love Song with Lobster

The Thin Monster House
A chapbook that explores monsters of self and society, some beautiful, all dangerous.
The Carnivorous Gaze
A collection of poetry and art that reflects "a rapacious affection for life" (David Biespiel)

"Lucky is the community that has someone with the skill and sensitivity of a Sue Parman to record its passing voices."

A Song for J.R.R. Tolkien

Nine years before Tolkien's death, an 18-year-old college student writes to him and offers to sing him the poetry from his books that she has set to music. The letters he sends haunt her for the next 40 years. Published in The Antioch Review (Winter 2015), this memoir piece is a meditation on journeys and longing.

"In 1964, when I was eighteen, John Ronald Reuel Tolkien was seventy-two. He had been retired from his position as Oxford professor of Anglo-Saxon for five years, whereas I was five years away from my doctoral research in Scotland. Nine years later, about the time I started my first teaching job, he was dead. Our paths crossed at the end of his life shortly before he reached the cult status with which people associate him today. At the time I discovered him he was not yet famous (William Ready, librarian at Marquette University, bought his papers in 1957 for less than $5,000); he was not yet getting calls in the middle of the night from fanatics in California who wanted to ask him questions about the pronunciation of Elvish words, and perhaps I was the first to send him a tape of songs that I'd made from his poetry." 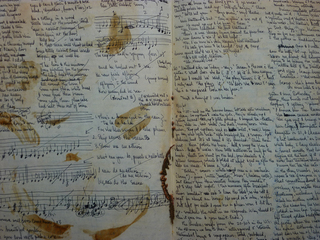 The International Journal of Travel and Travel Writing (2002)

"I could not put down Sue Parman's manuscript until I had read it from beginning to end twice, and then I had to go back and pick out some favorites. Her descriptive technique frequently causes objects to morph into other meanings which becomes a unique use of metaphor. A richness of well chosen words creates a flow of surprising interior as well as end-line rhyme." (Judith Massee) "Parman offers a universe of connection through master work in forms. Her hallmark is unusual and precise diction that reveals the profundity of relationship--human geographical, linguistic." (Sandra Ellston) "Keenly observant, intelligent, and filled with moments of beauty. I felt as if I was on a journey with a poet taking me to new, unexpected places." (Sandra Giedeman) 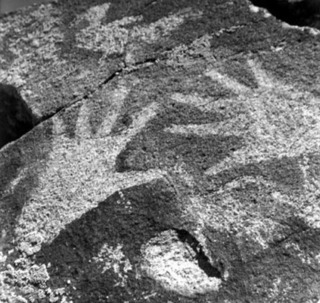 Growing up in New Mexico

"Thorny, witty, braided and woven and webbed, startling; dark and sweet and sad and funny; lines and passages that will haunt you for days; and behind it all, a wry sharp intelligence and large open bruised heart. A terrific read." (Brian Doyle) "...a marvelous romp through anthropology, philosophy, history, and language by a poet who knows the rules and breaks them. There's music and story here, form that is played with, hopped over and stepped around, poems of humor and wit, and poems that deal honestly and imaginatively with the most momentous of life's events--death, illnesses, and found and lost loves. As a poet, Parman is crafting a personal mythology fit for a new world." (Barbara La Morticella) "Sue Parman's poems are a fabulous mix of the formal and the miraculous. She uncovers what is beneath ground and is dazzled by what exists in the light. She tenders reality--relationships, work, time, love--with a direct style that is scaffolded by complex forms and complex ideas. 'The Carnivorous Gaze' comes to see everything in human experience with a rapacious affection for life." (David Biespiel)

Finifugal: Shunning the End of Anything

For your last meal from the OED
I serve you finifugal. I shun you
as I shun the end of a good book. I neglect
to turn out the light, keep saying,
"Oh this is a good one" as I scan the page
for one more word to keep you here. I laugh longer
and encourage you to talk between bites.
I practice abstinence of time,
mince words and eat each second slowly.
I shun your absence as you measure me for mine.

What began as anthropological fieldwork for Sue Parman’s doctoral dissertation in 1970-71 turned into a life-long relationship with a community in the Gaelic-speaking Scottish Outer Hebrides.
Robert J. Theodoratus, “British Isles,” Encyclopaedia of Cultural Anthropology 1:155, 1996: “The first social anthropological books on Scottish communities were by Americans and appeared in the 1980s. The best known is Susan Parman’s (1990) general description of a crofting community on the island of Lewis.”
From Chapter 6, "Kinship, Courtship, and Marriage": Ma tha thu airson do mholadh, baisaich; ma tha thu airson do chaineadh, pos. (If you want to be praised, die; if you want to be criticized, marry.) 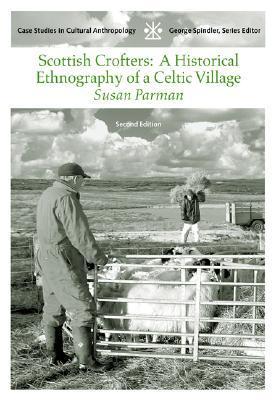 First encounter between the author and Robert J. Storey, Research Officer for the Highlands and Islands Development Board whose job is to vet researchers who want to study Gaelic-speaking crofters. (published in Lumina 2011)

A study of Western cultural structures of knowledge and meaning that relate to dreams from Homeric Greece to the present day. I employ semiotic anthropology to explore the semantics (meanings), syntactics (linkages with other symbols), and pragmatics (uses) of the dream as a way of describing assumptions in the Western intellectual tradition about the mind, what it means to be human, and what humanity's place is in the universe. This is one of my favorite books, and for many years it was available only in an expensive hard-cover edition from Praeger. I now own the rights and hope to issue a revised edition.

Dream and Culture: An Anthropological Study of the Western Intellectual Tradition (with Turkish translation)

“Lot’s Wife and the Old Salt: Cross-Cultural Comparisons of Attitudes toward Salt in Relation to Diet,”

The Human Relations Area Files (HRAF), housed at Yale, is a difficult tool to use and has received a lot of criticism, especially with regard to the issue of what is being compared to what, but it represents a bold and interesting experiment in scientific method. After writing two grants for a new research facility and the computer lab to go with it, I persuaded the university to change its membership in HRAF from associate to sponsoring, and for several years I served on the board, including a year as Chair (the first woman to do so; Yale is more conservative than California). I have a long history of grant-getting from the National Science Foundation (beginning with an undergraduate research scholarship in neurophysiology), but I've also gotten grants from the National Endowment for the Humanities, and my research tends to be descriptive, qualitative ethnography.

When I became a HRAF board member, I decided I'd better put my money where my mouth was, and I designed a research project using cross-cultural analysis that focused on one small piece of a larger project on salt. (Note: One of my biggest problems with many cross-cultural studies is that they are often trivial. When I attended a National Science Foundation Summer Institute on Research Methods in Cultural Anthropology at the University of California, Irvine in 1995, I argued that the wording on our t-shirts, "Anthropology counts," should be changed to "Anthropology counts things that count.") If I was going to spend an enormous amount of time sorting through quantitatively significant amounts of information in the HRAF database, I wanted to ask qualitatively significant questions.

The interesting thing about salt is that it's essential for human biology but too much salt has negative consequences. What if culture (in the form of positive and negative valuations) acts as an unconscious regulating mechanism on salt consumption, encouraging its consumption in conditions of salt scarcity (as, for example, in a mostly vegetarian diet), and discouraging its consumption in conditions of salt abundance (as, for example, in a heavily meat-eating diet)? I tested this hypothesis, sorting cultures by diet, and then (a trickier process) sorting statements about salt into positive or negative categories (e.g., in Scotland Gaelic-speakers say something is "as dear as salt" whereas the Onge of the Andaman Islands find salt unhealthy and disgusting). Findings were statistically significant in support of the hypothesis. Given American society's high meat consumption, it's perhaps not surprising to find salt given such negative press. 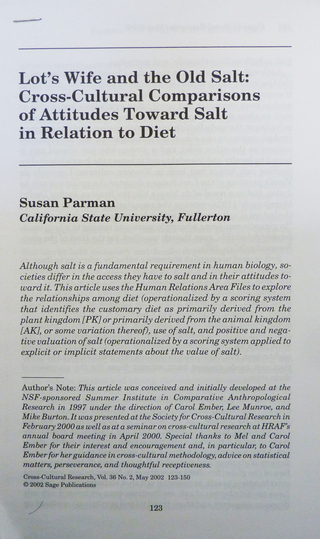 Lot's Wife and the Old Salt

“The Meaning of ‘Europe’ in the American Anthropologist (Part I),” 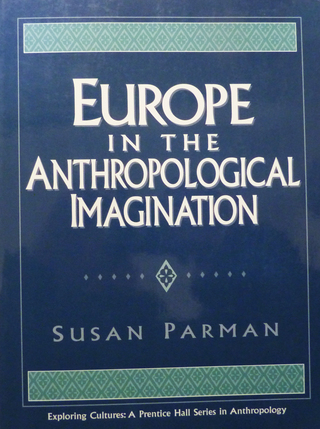 Europe in the Anthropological Imagination

In contrast with the stringent methodology used in the research on salt, I used a different technique when doing research on the study of Europe in Anthropology. The study of Europe has traditionally been the province of historians, sociologists, economists, and political scientists, and if anthropologists studied Europe they studied marginal peoples (e.g., crofters in the Scottish Outer Hebrides, as the Western Isles were called when I started my doctoral research). I edited Europe in the Anthropological Imagination to assess not only what anthropologists had learned about Europe but what anthropologists had learned about anthropology. If anthropologists couldn't study everyone, they had no right to claim universality. The final chapter in the book is one I wrote called "The Meaning of 'Europe' in the American Anthropologist (Part I)." My "methodology" was to start reading from the 19th-century beginnings of the American Anthropologist (that icon of the anthropological profession in the United States) up to 1970, taking notes and generating categories and themes--a rampant case of induction. I felt elated from the roller-coaster ride but sobered and embarrassed by some of my profession's fixations (e.g., the preoccupation with race, immigration, and eugenics from 1888 through the 1930s). Some day I hope to get to Part II. 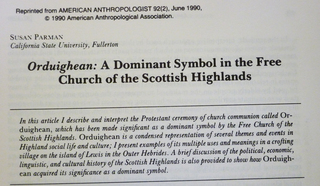